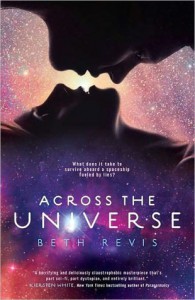 I was pleasantly surprised by this story, although I did have a bit of a disconnect with the characters.

The story is told from 2 different POVs. One POV is Amy and the other is Elder. Amy makes the decision to be frozen with her parents in order to live on another planet in the future. Their frozen bodies are loaded up on a ship that will take several lifetimes to reach its destination. One day someone tries to kill Amy by unfreezing her and leaving her locked up to drown in cyro fluid. Elder is the future leader of the ship and he is the one that finds Amy. This leads to so many mysteries and we find out lots of curious things about the ship.

I think my favorite thing about this book was the vast amount of conspiracies. Most of the people on the ship exhibited odd behavior. They seemed to be under some sort of mind-control.

"The third cause of discord," he says in a terrible monotone, "is individual thought. No society can thrive if a single individual can poison its members into mutiny and chaos."

Conspiracy is my most beloved of subjects. This book reminded me of a quote by Aristotle...

“It is the mark of an educated mind to be able to entertain a thought without accepting it.”


There are so many conspiracies that have been proven to be true. I love digging into them all and trying to determine fact from fiction. It is truly my most favorite hobby. Sometimes you find some horrible things, things that you wish you didn't know. That is what happened to Amy and Elder. The things that they found were earth shattering.

"They won't care to know; they won't seek any kind of truth. Some will-and they will not believe the truth. But others will need the truth, and crave it, and they will seek it, and accept it for what it is."

I crave truth, no matter how awful and ugly it may be. In a world built on lies the truth is the only thing we have. I'm curious to see what becomes of Amy and Elder. They have a lot to overcome. I just hope that I can connect better with the characters in the next book. I felt like something was lacking in the character development department. This would have been a 4 star rating had it not been for that.